As an introduction to the field of charged particle beam sources and facilities in which DREEBIT develops and sells products a quick tutorial about the basics of ion production is given. This includes general information as well as a list of important atomic processes and explains the ionization dynamics in ion sources.

Ions are created if electrons are removed from or added to the hull of an originally neutral atom. Considering the creation of positive ions, a certain amount of energy in necessary to lift the negative electrons out of the attracting potential of the positive nucleus. This energy is called the Electron Binding Energy. It depends on the amount of positive protons in the nucleus given by the atomic number of the element, on the atomic shell which a specic electron is sitting on, and on the number of other electrons which have already been removed from the ion and do not longer shield the positive nuclear potential.

There are two possibilities for transferring the necessary energy to an orbiting electron for ionization. One is Photoionization where the energy comes from electromagnetic radiation and the other one is Impact Ionization realized by incident particles hitting the electrons. Most ion sources use the principle of Electron Impact Ionization to create ions in laboratories or for industrial applications. However, impacting electrons do not only ionize atoms, a number of other atomic processes occur alongside. An equilibrium of charge creating and charge reducing processes ultimately determines the charge state distribution which is produced.

The most important process for the creation of ions is, as mentioned before, electron impact ionization. It can be described by this equation:

If the projectile electron energy is not sucient to ionize an electron from the target it can still excite it, i.e. electrons are lifted from their original shell to a shell of higher energy. The stored energy is mostly re-emitted by sending out radiation: 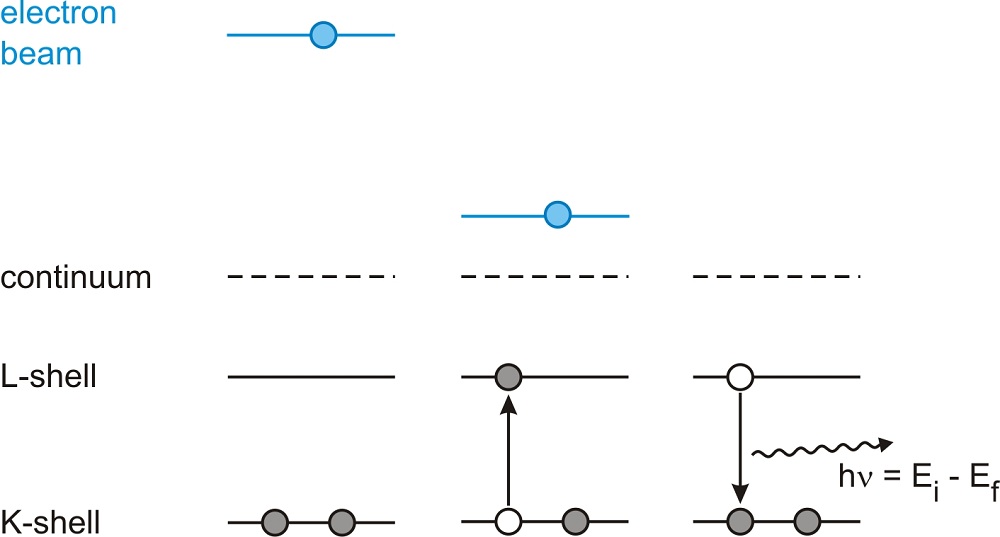 In a special case, an inner-shell electron of the targed is excited and the stored energy is sucient to ionize an outer-shell electron from its orbit. This kind of relaxation is called Autoionization or Auger Process:

Mostly, this case is much less relevant than direct electron impact ionization. However, if the electron projectile energy is adjusted to certain resonance energies dened by the potential dierences of the shell electrons, its probability can reach the same order of magnitude as direct ionization and the ionization process is signicantly enhanced.

The most important charge reducing process counteracting the ionization processes is Radiative Recombination. An ion captures a free electron, e.g. one of the projectile electrons, to reduce its potential energy while radiation is emitted:

In an equation, this process can be described as:

Radiative recombination is the inverted process to photoionization. Higher charge states of initial ions have a deeper trapping potential meaning it is the more likely for them to catch free electrons. This is one reason why it gets harder and harder to reach higher charge states if lots of electrons have already been removed from the shells of an ion ensemble.

This process can be used for diagnostic purposes on ion sources. With an x-ray detector the radiative recombination lines of ions can be analysed to gain information about the charge state distribution inside an ion source before the ions are actually extracted.

Dielectronic Recombination can be seen as an inverted process of autoionization. Like in the case of radiative recombination, a free electron is captured and in the end a photon is emitted. But for a short time in between the captured electron resonantly excites a second electron from the target shells before relaxation:

The equation to describe this process is:

Again, this process is usually much less important than radiative recombination. But if the projectile electron energy hits a resonance, it becomes almost as probable as the main charge reducing process resulting in a significantly higher reduction of charge states overall.

Dielectronic recombination is another important process for x-ray spectroscopical analysis on ion sources. If the electron projectile energy can be trimmed to hit resonances of certain ion species, even information about individual ion charge states can be gathered for diagnostic purposes.

This is the most improtant interaction of created ions and atoms among each other without any inuence of the projectile electrons. The positive potential of ions does not only attract free electrons but also weakly bound electrons from atoms and lower charge states:

Especially the transfer of electrons from neutral atoms to ions counts as an important charge reducing factor. This is why it is harder to achieve high charge states if the pressure and thus the number of neutral particles surrounding the ions is high.

As described in the last section, multiple processes compete within an ion source based on the principle of electron impact ionization. The final ion charge state distribution is mainly determined by an equilibrium between electron impact ionization and radiative recombination as well as charge exchange. Charge creating and charge reducing processes are again summarized in Figure 1, a graph also showing the ionization energies of krypton ion charge states as an example. 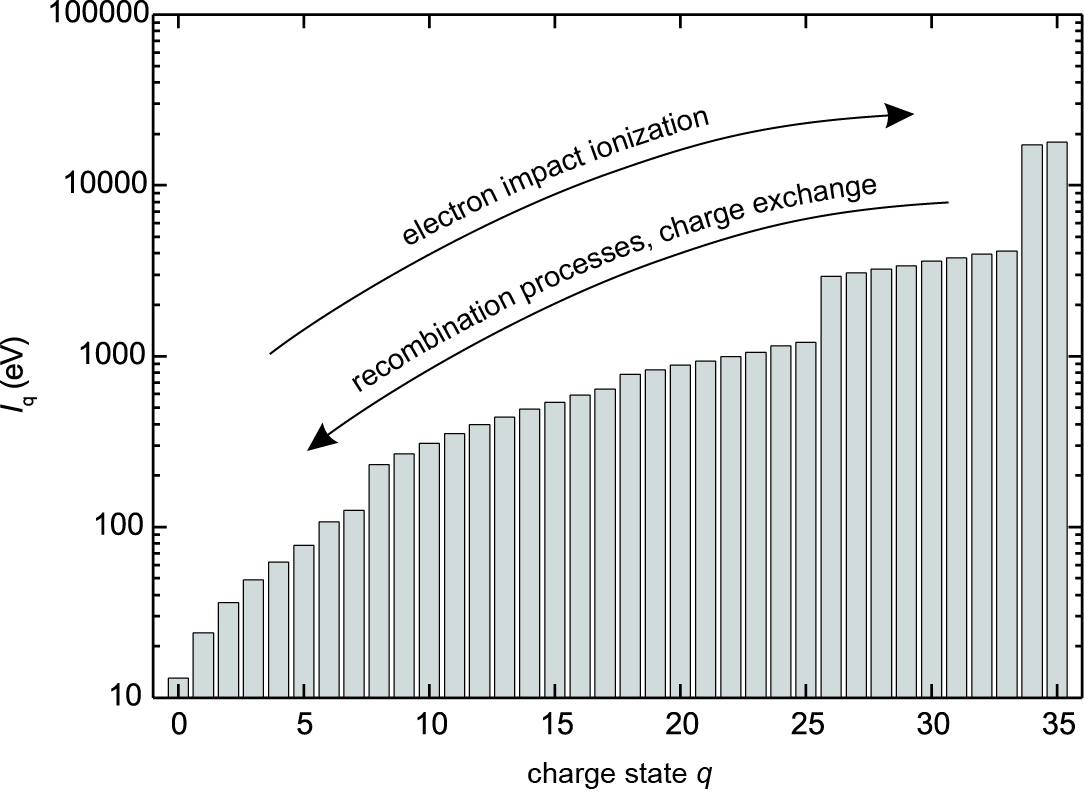 To reach a certain charge state, the energy of the electrons hitting an atom or ion must of course exceed the ionization energy necessary to release another electron from the attracting potential of its nucleus. Above this threshold energy, high electron current densities increase the probability of the ionization processes happening. But the higher the mean charge state of the distribution inside the source gets, the more recombination processes take place. Also, high pressures in a gas which is supposed to be ionized can in principle produce more ion output but charge exchange processes lower the maximum charge states which can be achieved.

Another fact which needs to be taken into account for the highest achievable charge states is the time which particles spend within the trap region where they can be reached by electrons for further ionization. The product of electron current density je and ion trapping time τ defines the so-called ionization factor of an ion source:

Dresden EBIT and EBIS sources feature comparatively high ionization factors of > 1 · 1021 e/cm2 or 1 · 1022 e/cm2, respectively. With these sources, very high charge states of different elements from hydrogen up to gold and mercury have been achieved, as summarized in the following periodic table of elements.